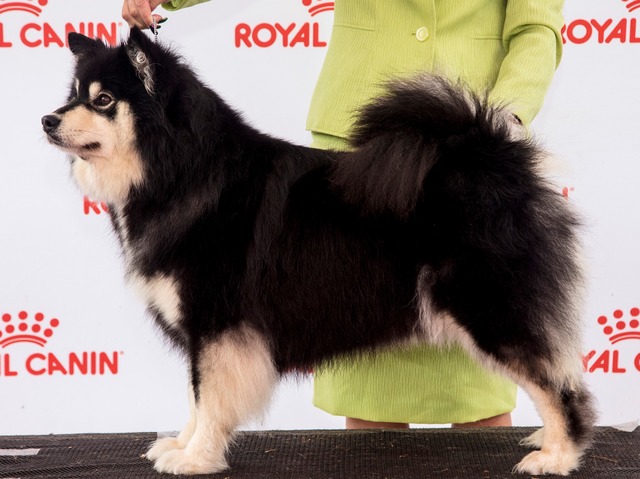 HISTORY:
For hundreds of years the Sami people have used dogs of the same type as the Finnish Lapphund as reindeer herders and watchdogs in Fennoscandia (Finland, Norway, and Sweden in their entireties, it also includes part of Russia). The first standard of the Lapponian Herder was established by the Finnish Kennel Club in 1945. The breed's name was changed into Lapphund in 1967.  In the 1970's the type and characteristics of the breed stabilised and the standard has been revised several times. The breed name was again changed to Finnish Lapphund in 1993.
In 2016, the FCI changed the English translation to Finnish Lapponian Dog but so far the major English-speaking countries have not adopted the name change. Breeders also dislike the poor translation of the breed standard that went along with the revision and which was adopted by the ANKC in 2017
The breed type has become stable in a short time and today the breed is very popular in the whole of Finland, mainly as a house and hobby dog.

GENERAL APPEARANCE:
Smaller than medium sized. Strongly built for his size, slightly longer than the height at the withers. The coat is long and dense.
Important Proportions: The depth of chest is approximately half of the height at the withers. The muzzle is slightly shorter than the skull. The skull is slightly longer than broad, the depth is the same as the breadth.

CHARACTERISTICS:
Utilisation: Originally a herder and watch dog used in the work of keeping reindeer. Today also popular as a companion dog.

HEAD AND SKULL:
Strong in outline, rather broad.
Cranial Region:
Skull - Broad, slightly convex. The forehead is rather domed. The frontal furrow is clearly defined.
Stop - Clearly defined.
Facial Region:
Nose - Black or Brown, according to coat colour.
Muzzle - Strong, broad and straight; viewed from above and in profile, evenly, but only slightly tapering
Lips - Tight.
Cheeks - The zygomatic arches are well pronounced.

EYES: Oval shaped, dark brown, according to coat colour. The expression is soft and friendly.

EARS: Medium sized. Carried erect or semi-erect. Set rather far apart, rather broad at the base, triangular in shape and very mobile. Also the inner side is covered with hair. It is equally acceptable that one ear is erect and the other is semi-erect.

NECK: Medium in length, strong and covered with profuse hair.

FOREQUARTERS:
General Appearance - Powerful with strong bones. Viewed from the front straight and parallel.
Shoulders - Slightly oblique.
Upper Arm - As long as the shoulder blade. The angle between shoulder and upper arm is rather open.
Elbows - Approximately at the level of the lower edge of the ribcage, pointing straight backwards.
Forearm - Rather strong, vertical.
Carpus [Wrist] - Flexible.
Pastern - Of medium length, slightly oblique.

BODY:
Withers - Muscular and broad, only slightly pronounced.
Back - Strong and straight.
Loins - Short and muscular.
Croup - Of medium length, well developed, only very slightly sloping
Chest -  Deep, rather long, reaching almost to the elbows, not very broad. The ribs are slightly arched; the forechest clearly visible, not very strong.
Underline - Only slightly tucked up.

FEET: Well arched, oval rather than round, covered with dense hair. The pads are elastic. Dense hair between the pads.

TAIL: Set rather high, medium in length, covered with profuse and long hair. The tip of the tail may have a J-formed hook. When moving, the tail is curved over the back or side; at rest it may hang down.

GAIT/MOVEMENT: Effortless. Changes easily from trot to gallop, which is the most natural style of movement. The legs move parallel. Agile and fast when working.

COAT: Skin - Tight without wrinkles.
Hair- Profuse, the males especially have an abundant mane. The outer coat is long and harsh. On the head and on the front of the legs, the coat is shorter. There must be a soft and dense undercoat.

COLOUR: All colours are permitted. The basic colour must be dominant. Colours other than the basic colour can occur on head, neck, chest, underside of the body, on legs and tail. (*See our page on Colours)

FAULTS: Any departure from the foregoing points should be considered a fault and the seriousness with which the fault should be regarded should be in exact proportion to its degree and its effect upon the health and welfare of the dog and on its ability to perform its traditional work.
- Males not masculine and females not feminine
- Light head
- Insufficient stop.
- Overangulated or too straight rear angulation
- Tail carriage continuously lower than the topline.
- Lack of undercoat.
- Flat coat
- Curly outer coat.
- Basic colour not dominant.

NOTE:- Male animals should have two apparently normal testicles fully descended into the scrotum.
Only functionally and clinically healthy dogs, with breed typical conformation, should be used for breeding.