Colours of the Finnish Lapphund - A Rainbow of Possibilities

Black - Black with tanpoint markings is easily the most well known and recognised colour for the breed. Tan intensity varies from palest cream to deep caramel. Solids may have white markings and spectacles. White markings should not be confused with very pale tanpoint. Ullastiina Felix, Staalon Ex Tempore and Pörröpöksyn Karva-Kamu are the only 3 solid blacks in the group below. 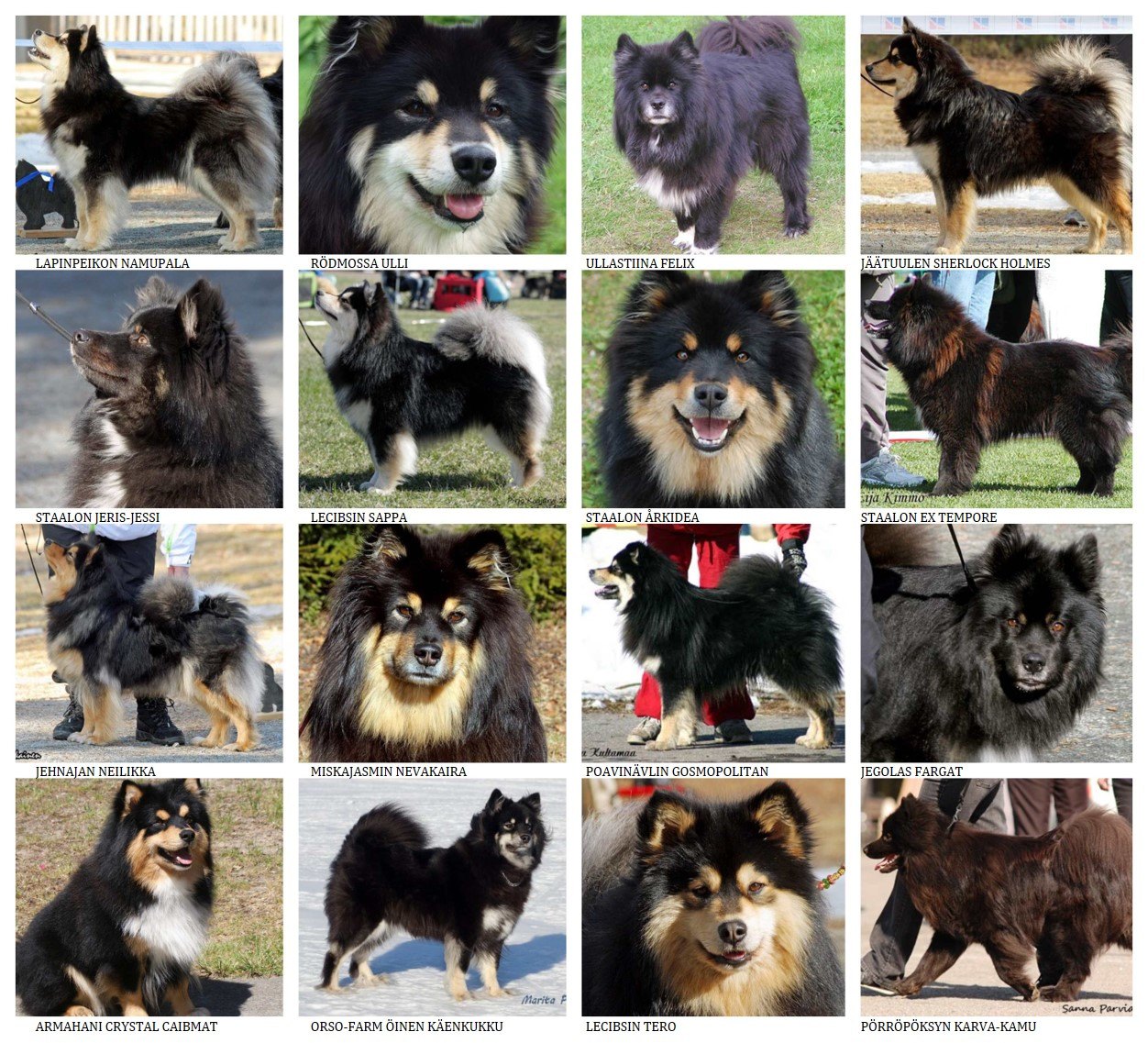 Brown - is recessive to Black, meaning its inherited from both parents. Brown Finnish Lapphunds are found in various shades, with or without Tan and White markings the same as black above. 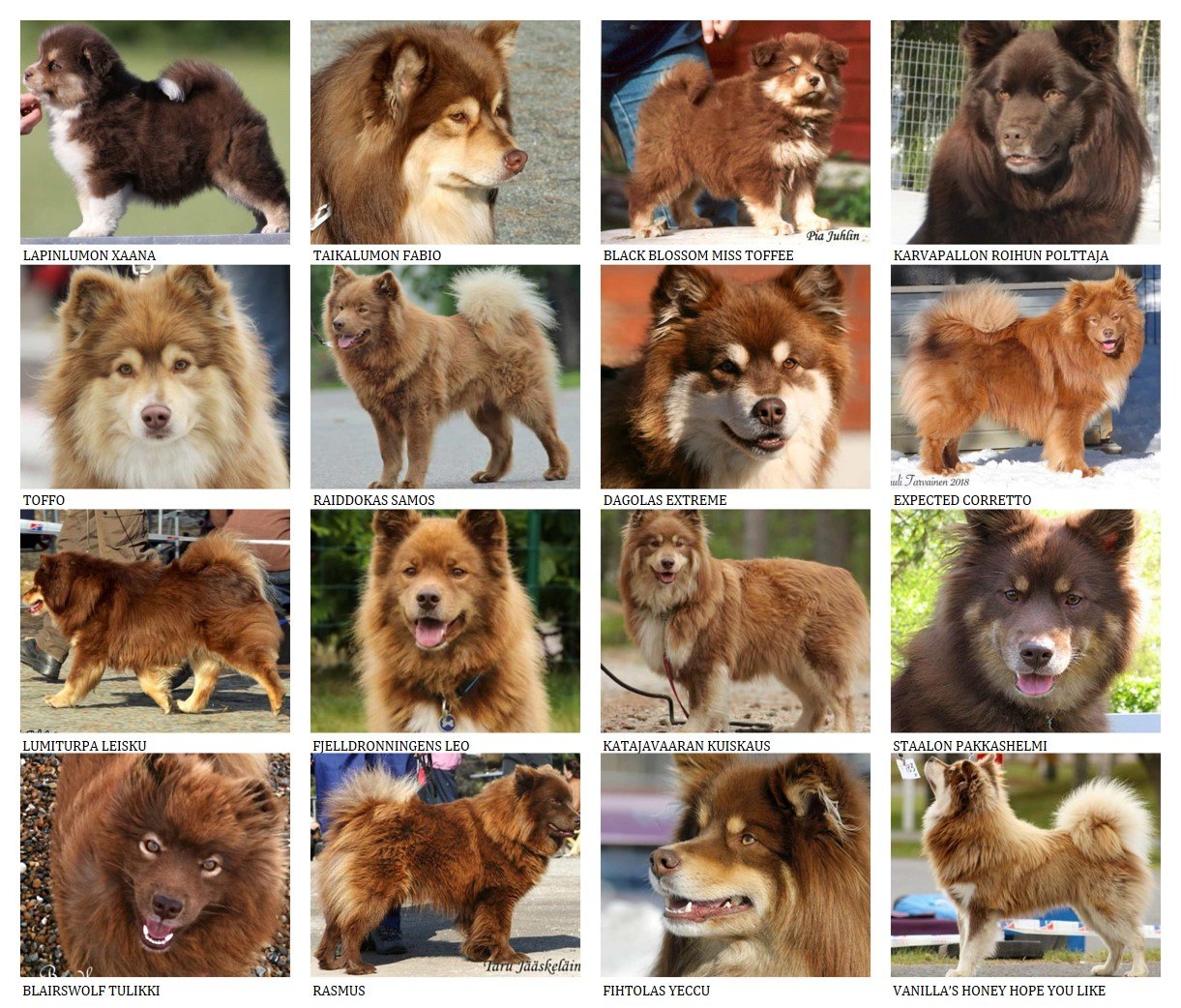 Cream - recessive inheritance, meaning it's inherited from both parents. the pigment on nose, eyerims and feet giving away the base colour of Black, Brown or even dilutes. Under cream, they can also be hiding sable, wolf sable, tanpoint or solid patterns. Pigment often fades over time on Cream Finnish Lapphunds, and even more so over the winter. The first two rows below are black based creams. The bottom two rows are brown based creams. 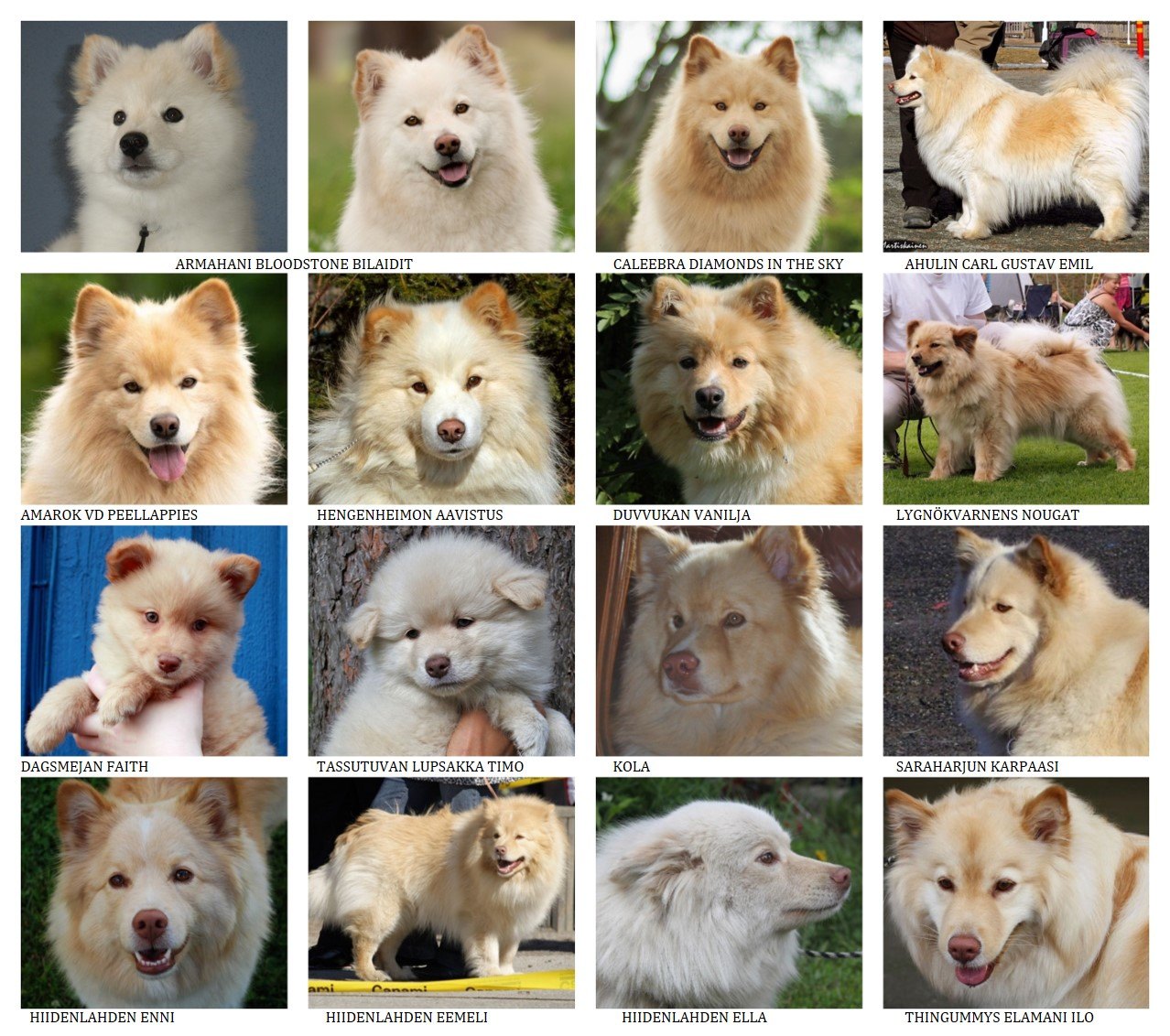 Dilute - Blue. the recessive Dilute gene on a Black dog produces Blue. Whilst fairly obvious in a puppy, as adults it's often more difficult to distinguish between Black and Blue. Puppies are pictured here together to show the difference. This colour is uncommon. 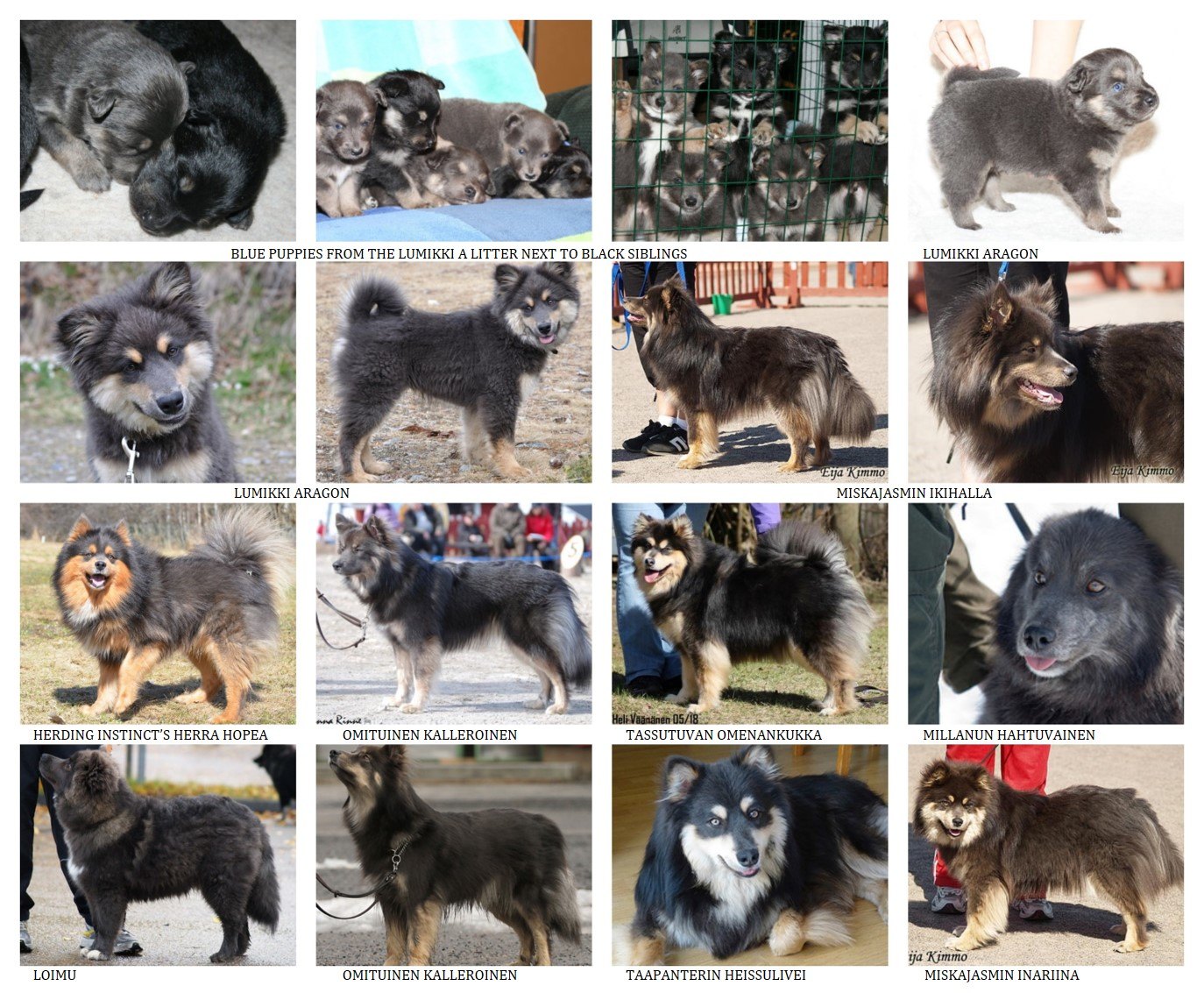 Dilute - Lilac. The recessive dilute gene on a Brown dog produces Lilac. Due to the recessive nature of both Brown and Dilute, this colour is also uncommon. 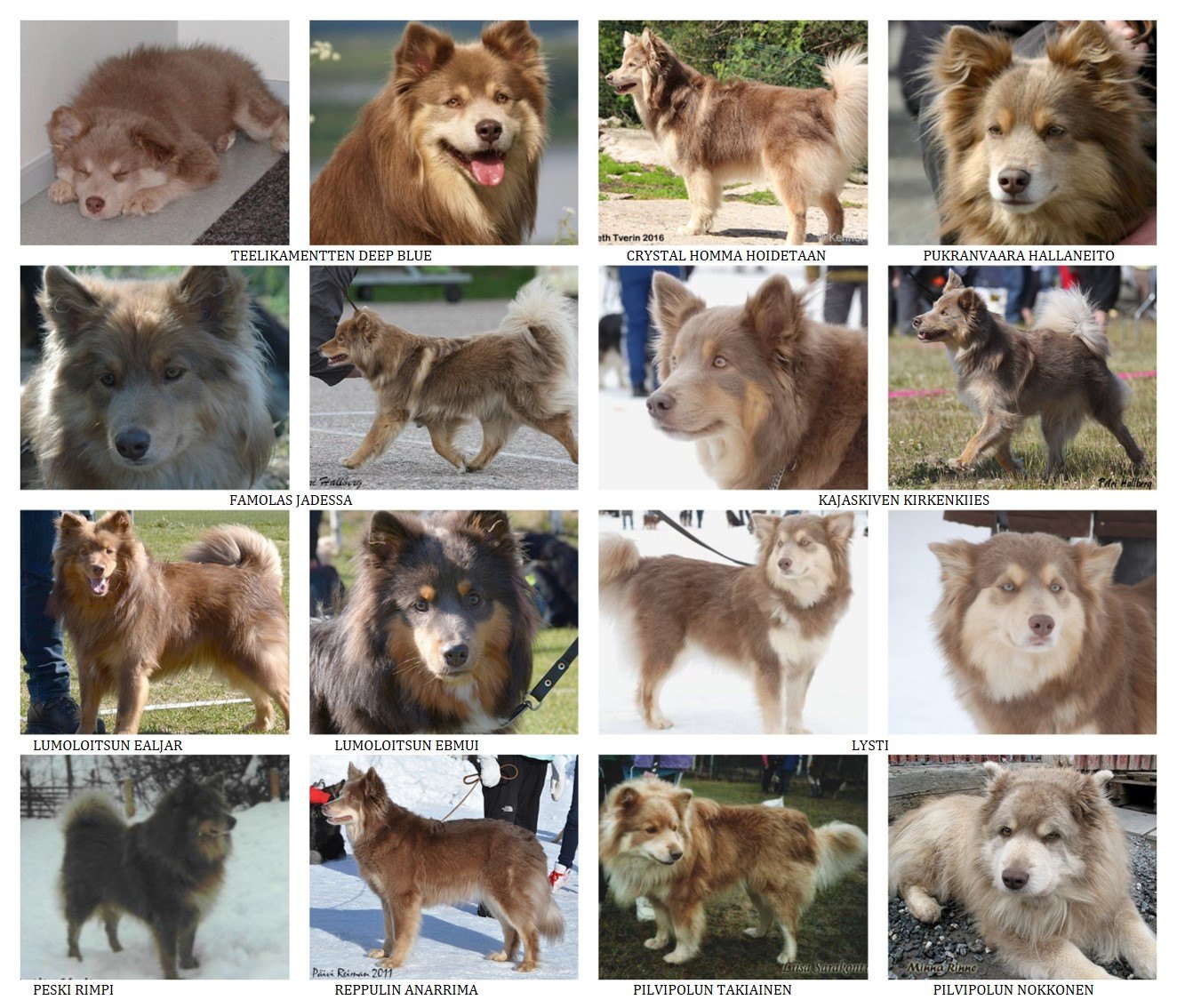 Sable (Ay) (Black) - Dominant inheritance meaning the dog only needs one copy of Ay to be Sable. Sable Finnish Lapphunds range in colour from the palest cream to deep red/orange. Black or Brown pigment and sable tips gives away the base colour. The pigment is often (but not always) retained and doesn't fade over time like it does on Creams. 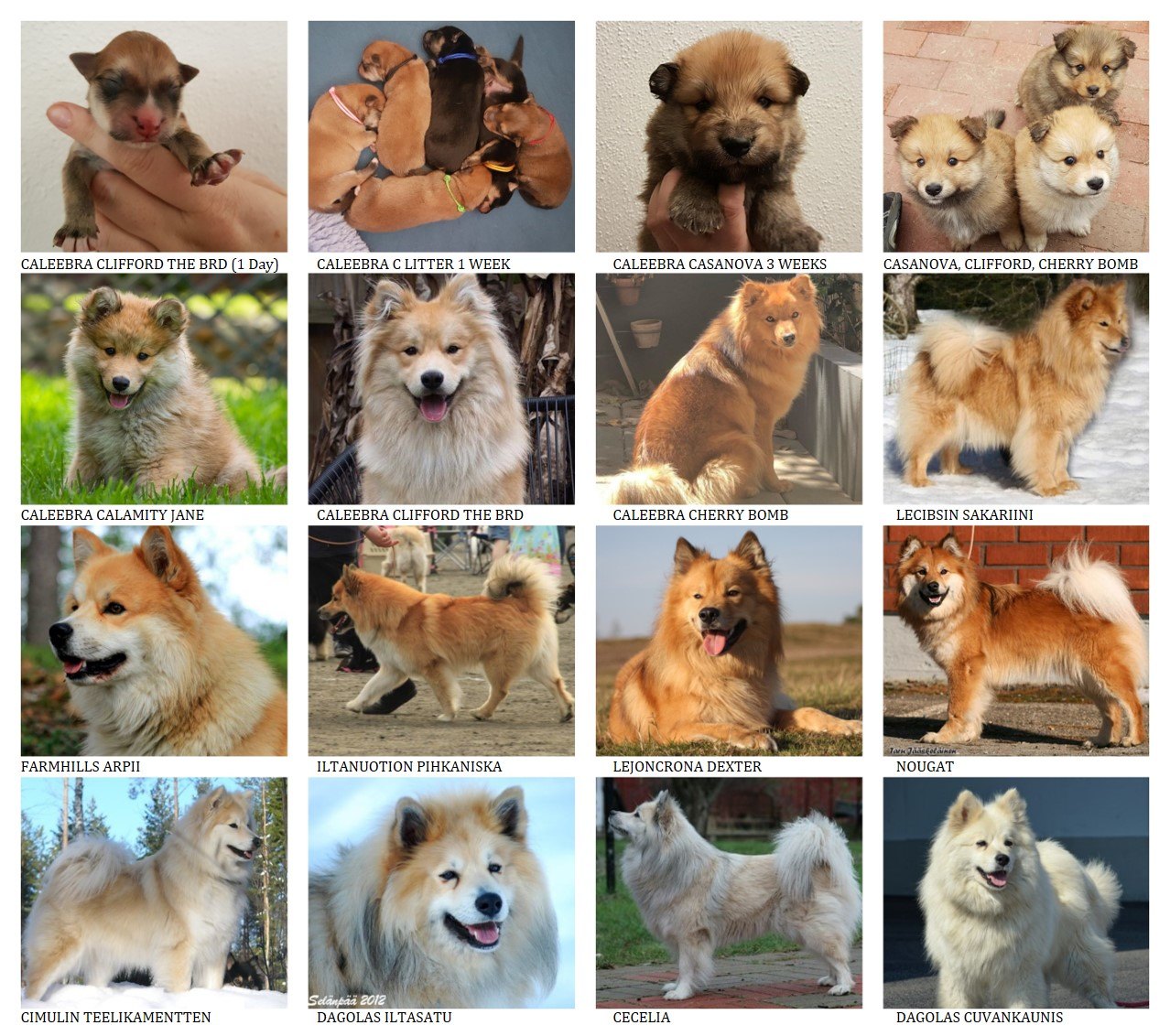 Sable (Ay) (Brown) - Sable inheritance is dominant, but brown is recessive. Again the cream can range in colour but the brown tips and pigment give away the brown base colour. These can be much harder to identify but a parent should be Sable in order to produce Sable. (Dominant solid or Cream can, of course, mask Sable)
Theoretically Sable can also come in both dilute Blue and Lilac and i'm sure they exist, but I haven't been able to confirm any. Yet. 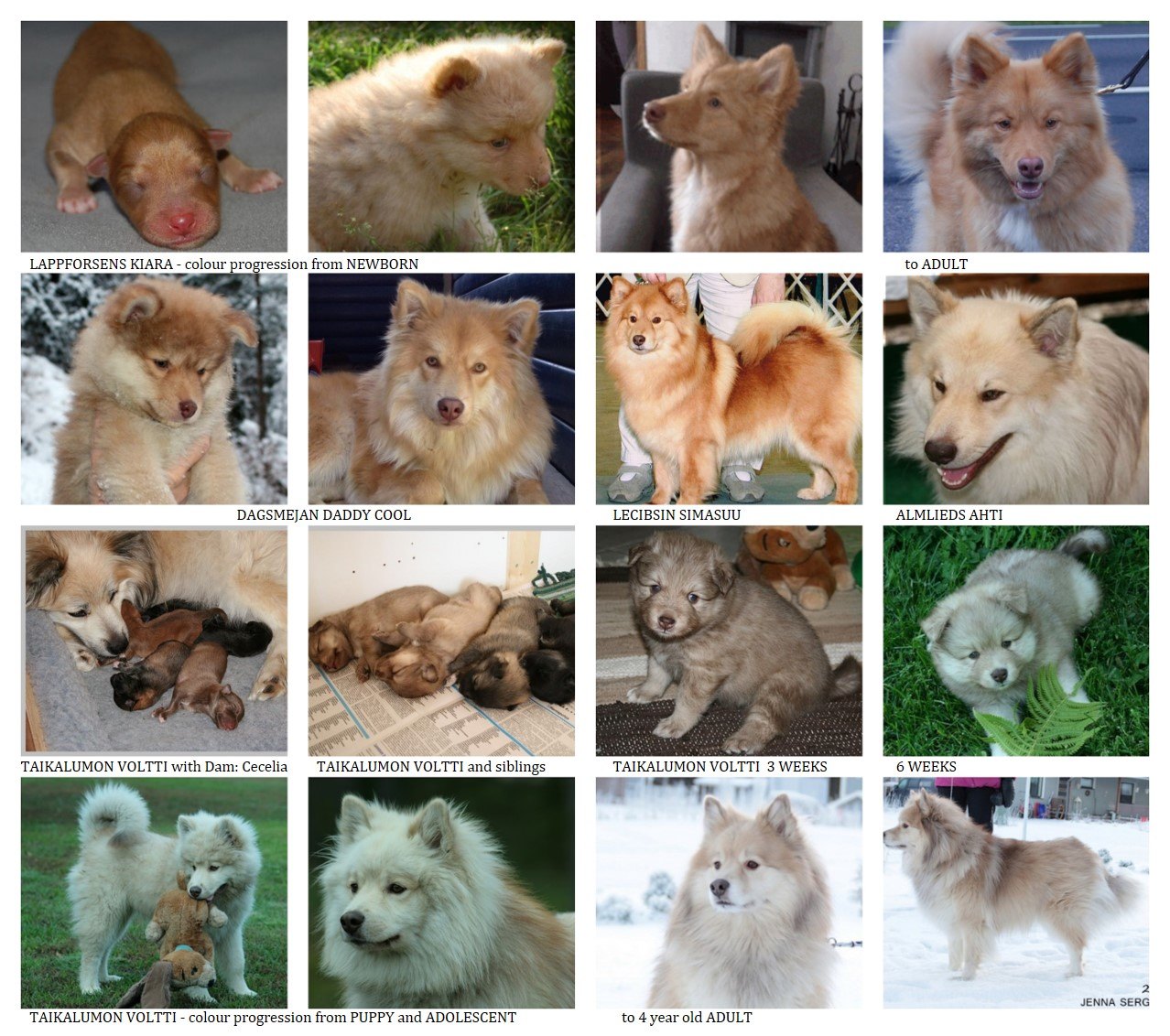 Wolf Sable (Agouti - Aw) - Black.  Dominant inheritence meaning you only need one copy of Aw from one parent to produce Wolf Sable. Wolf Sable dogs range in colouring and can be seen with and without face masks. The first pictures are the same bitch as a puppy and adult to show the progression of colour. These are more obvious examples of Wolf Sable but the actual colour can be difficult to identify at birth and again as adults as the sable (black tip) guard hairs can cover the body, giving the appearance of a Black and Tan dog.

Wolf Sable (Aw) - Brown. Wolf Sable is dominantly inherited but Brown is recessive which can make this colour combination less common. There are many registered 'Brown' Lappies who are suspected to actually be Brown Wolf Sable. The wolf sable can sometimes be hard to detect. 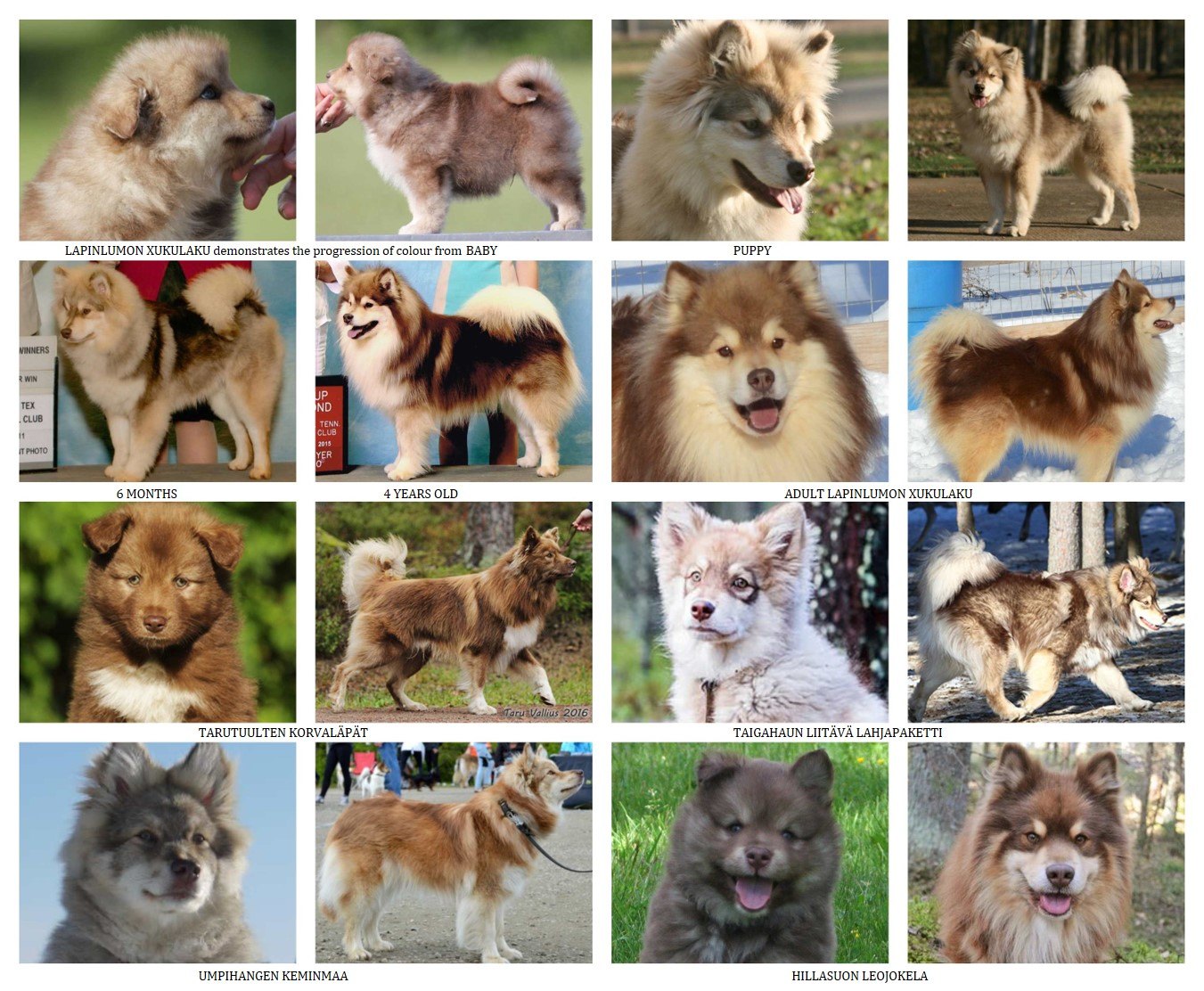 Wolf Sable (Aw) - Dilute - These photos attempt to show the progression of the colour as the dog matures. I haven't yet found a Lilac Wolf Sable. I suspect it may sometimes pass undetected or be labelled Brown as the colouring is not always as obvious. Dilute and Wolf Sable seems a reasonably uncommon combination and may be harder still to identify on an adult as the colour darkens with age. 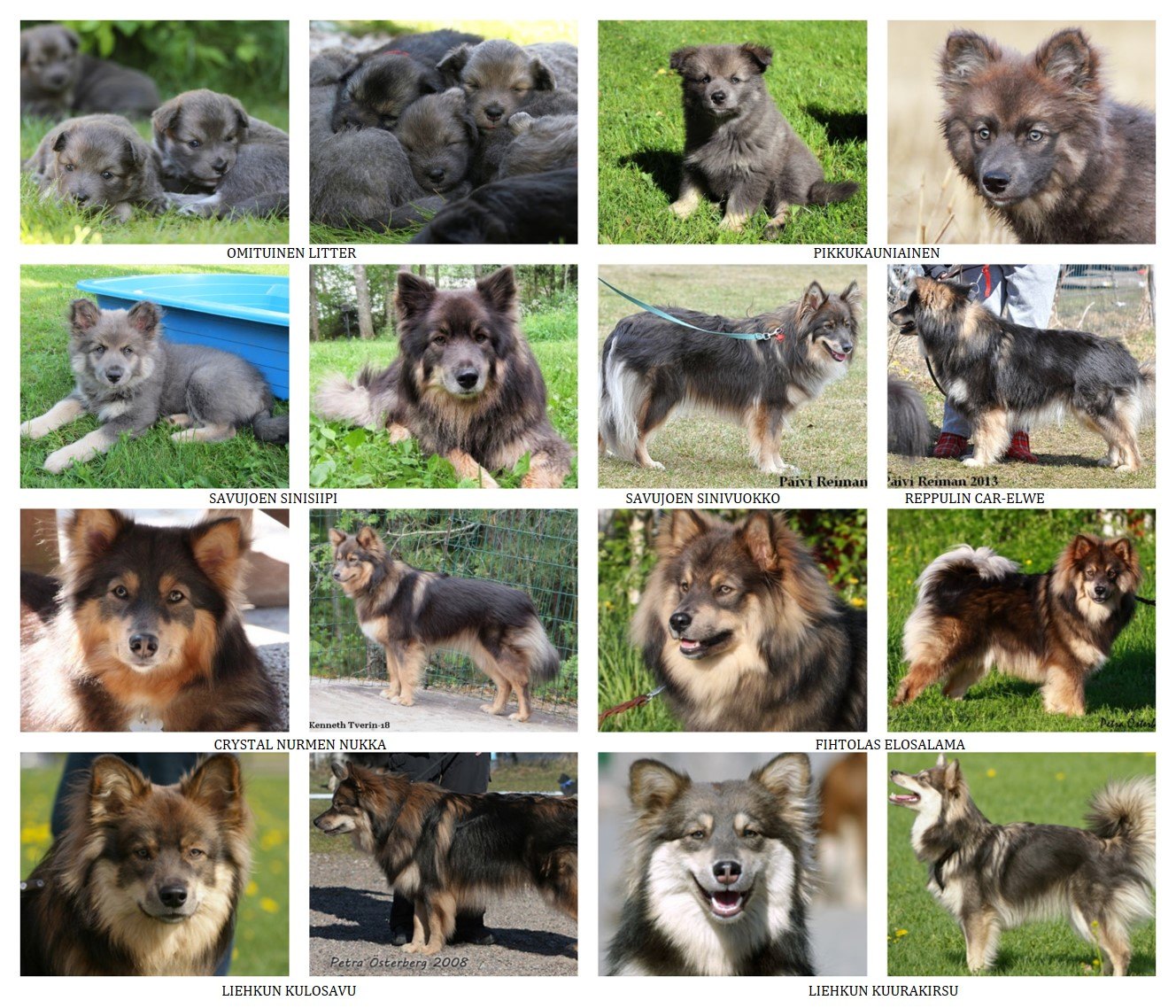 Domino (Black) - is a recessively inherited pattern that affects the expression of the base colour (black, brown, dilute). This pattern is apparent at birth with a telling, clear mask on the face. The colour and shading varies greatly. Like Cream, domino can mask other colours (like dominant black) 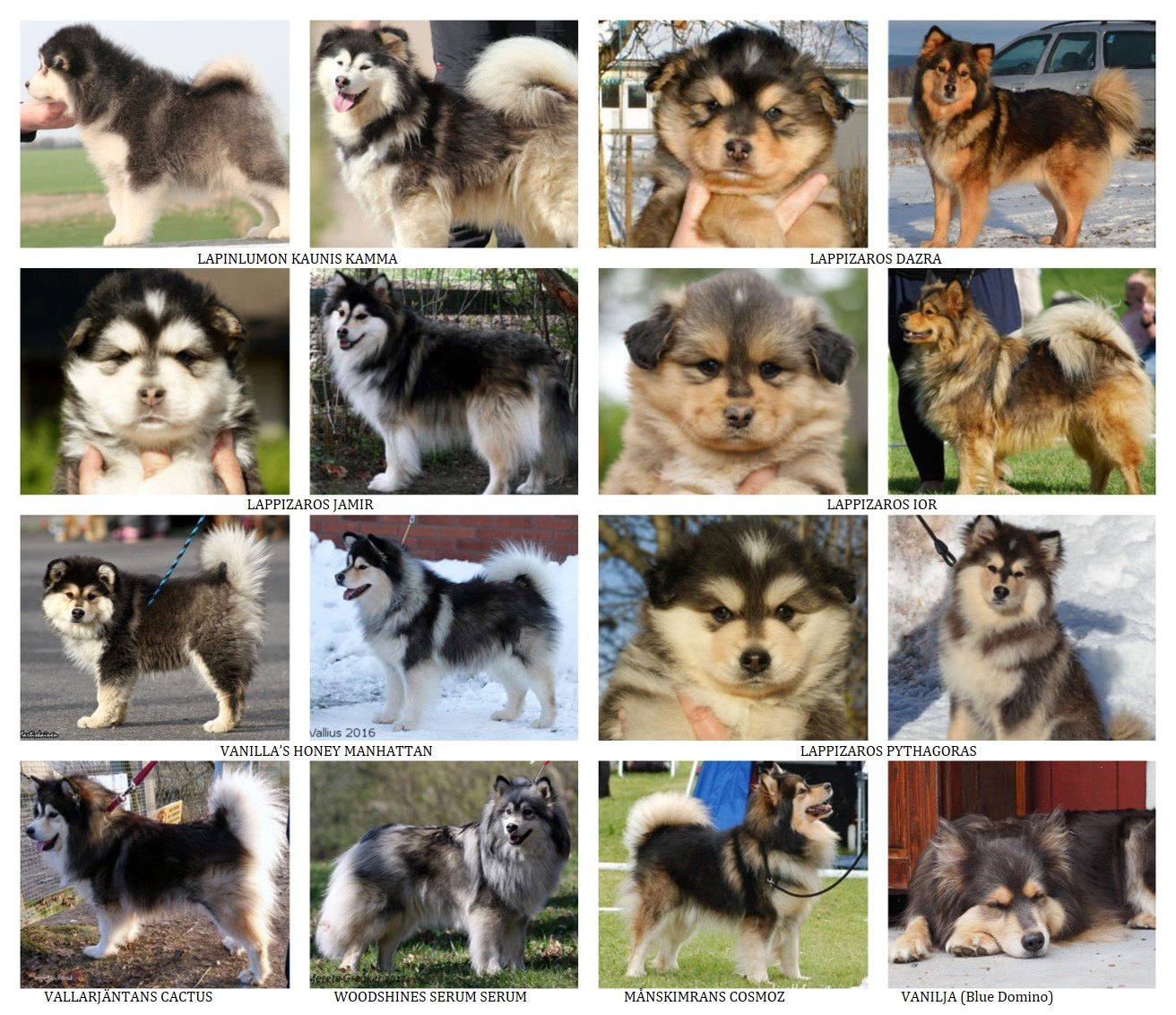 ​Domino (Brown) - less common than Black as you need a pair of recessive brown genes, but more common than Domino Dilute (Blue and Lilac) 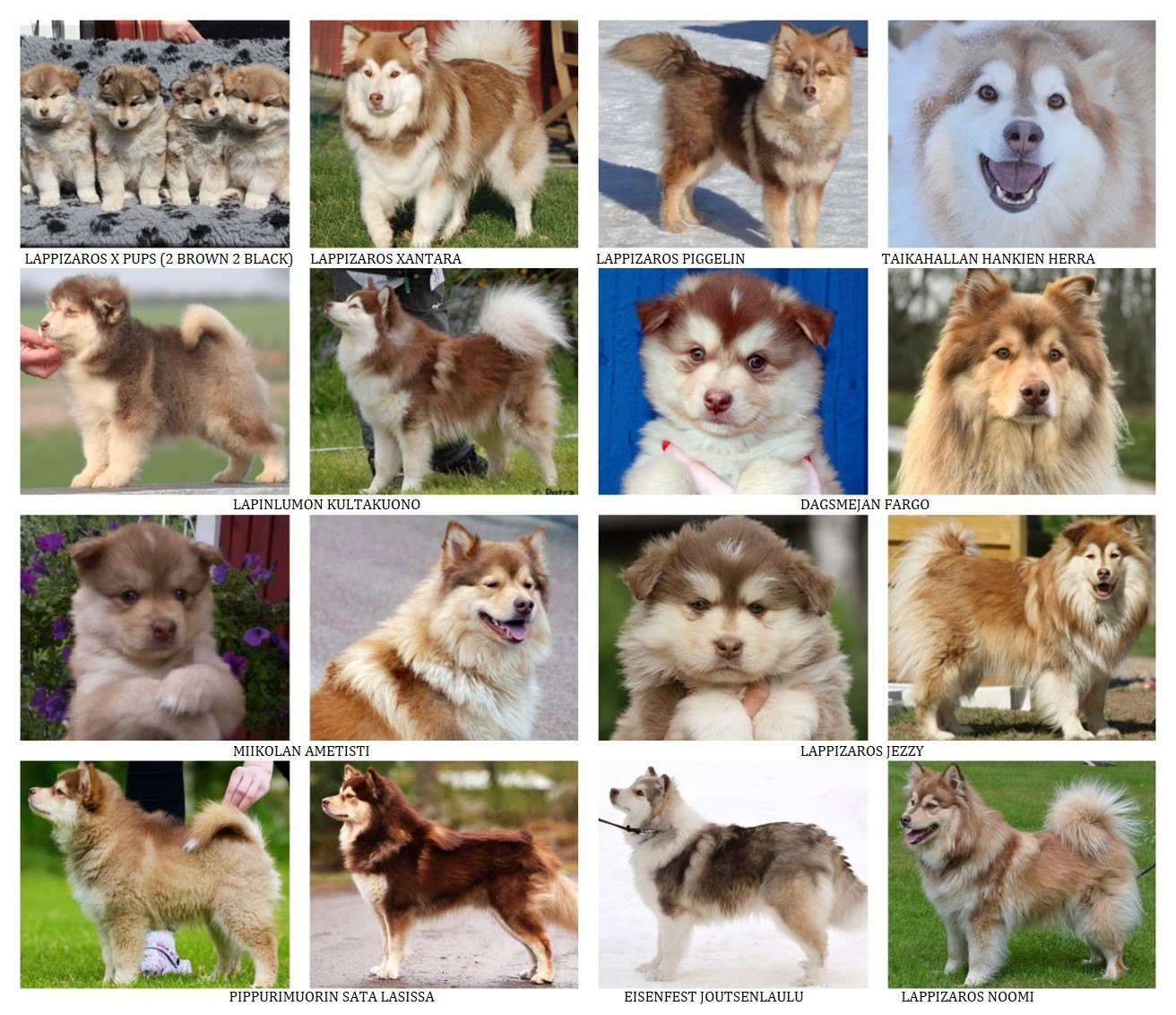 Patterns and markings - Irish Spotting White markings which can occur on any other colour - usually on chest, legs and feet. Can extend to the face, back of neck or even a full collar. Full body white with patches of colour are not desirable for the show ring and are uncommon. 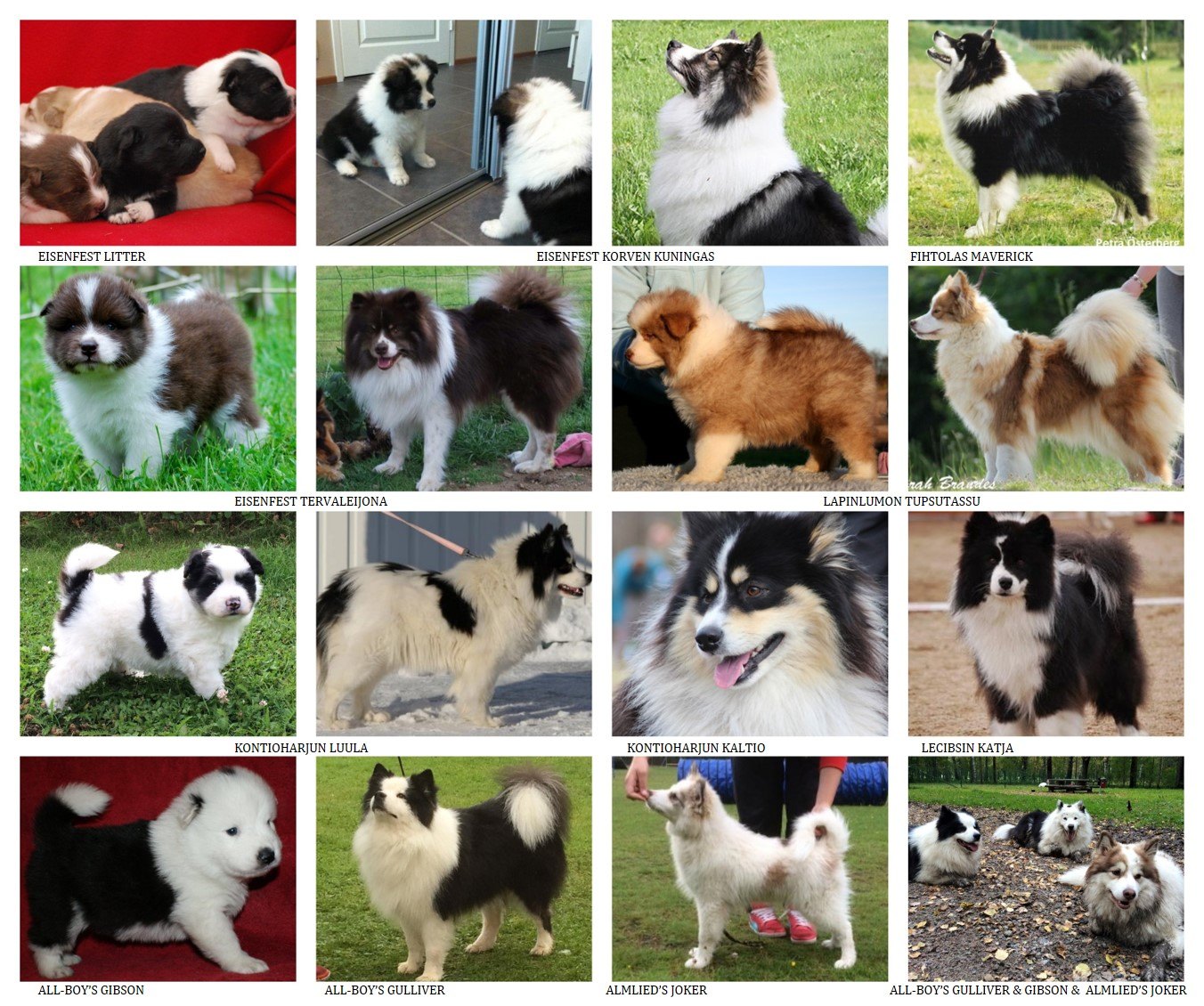 Patterns - Saddleback - Difficult to detect on a puppy but as it has dominant inheritance is somewhat easier to predict as it will come from a parent. Deemed an undesirable colour several decades ago and so has become increasingly uncommon. This pattern is unlikely to be produced in Australia. 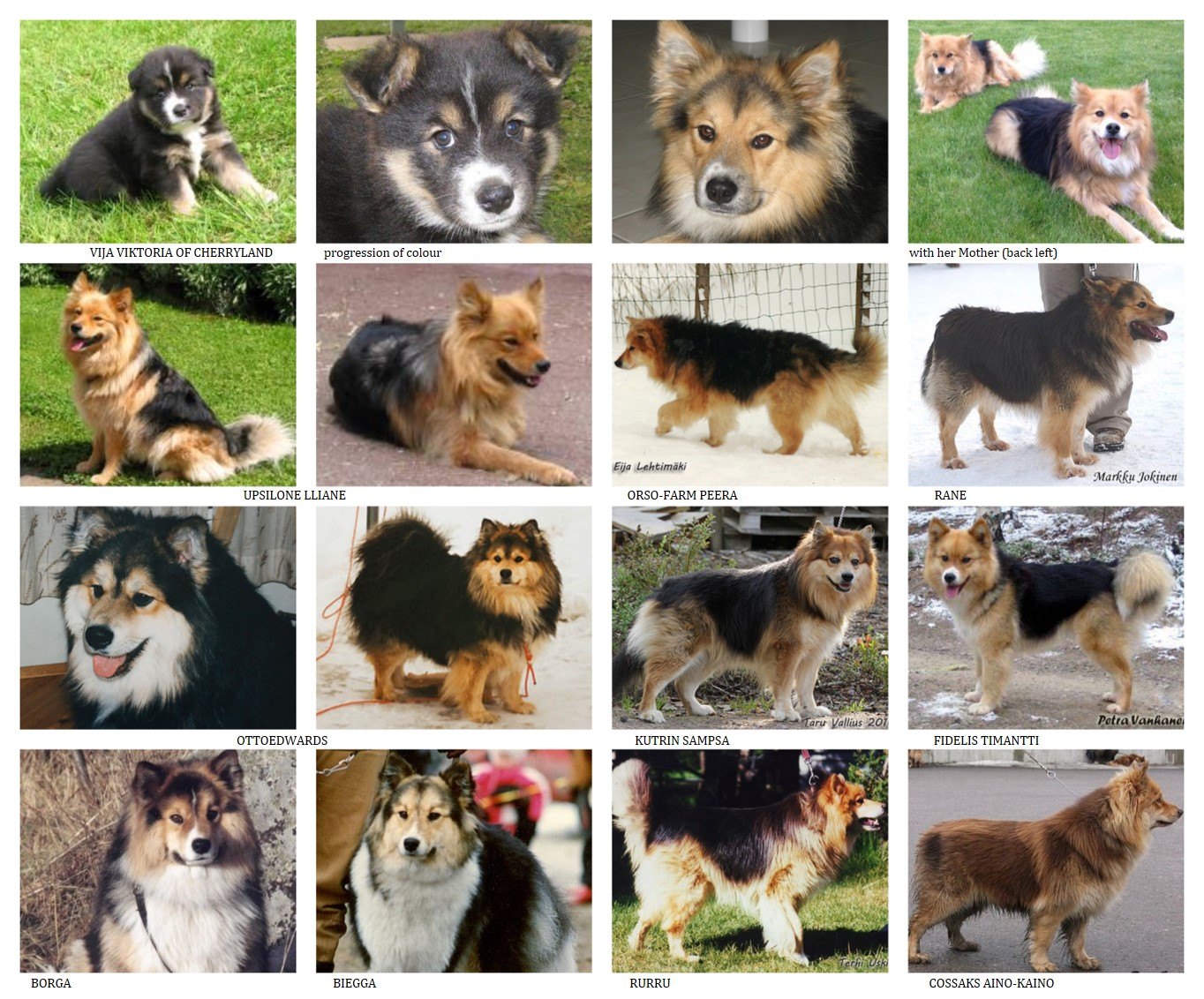 Patterns - Brindle - dominant inheritance. Another undesirable colour in Finnish Lapphunds and so it's unlikely to be produced in Australia.
The brindle pattern is seen on sable dogs, or where the tanpoint would be, so it can be missed on a dog with minimal points. We've included some more obvious examples here

Masks and Spectacles - The traditional signature look of the Finnish Lapphund includes a tan mask. Some are fuller and bright with clear edges, others are less distinct. Finnish Lapphunds can also develop spectacles around the eyes. These can be in addition to a mask or entirely separate. 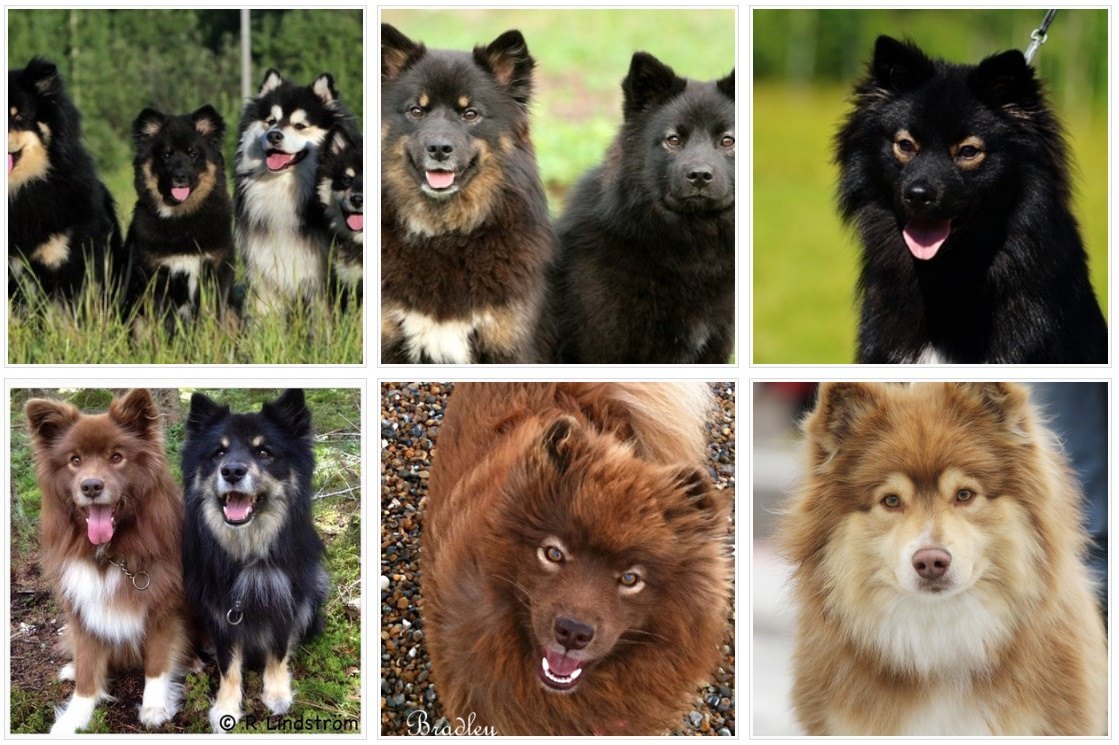 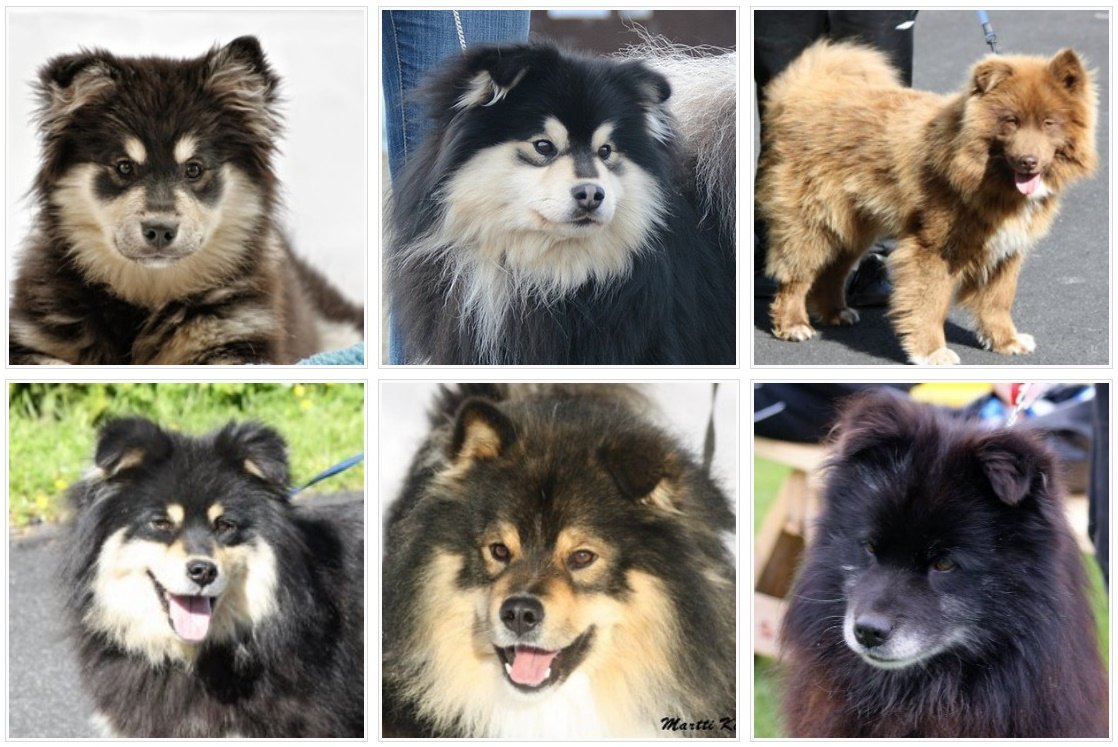 Brown Eyes - Eye colour should be brown. Whilst dark brown eyes are considered the ideal, coat colour affects the shade of colour with Brown, Wolf Sable and Dilute colour Lappies often having a lighter eye, though usually complementing the coat colour. Occasionally 1 or both eyes are blue. This occurence is linked to White spotting, but unlike Siberian Husky's blue eyes are highly undesirable and not sought after in a Finnish Lapphund. 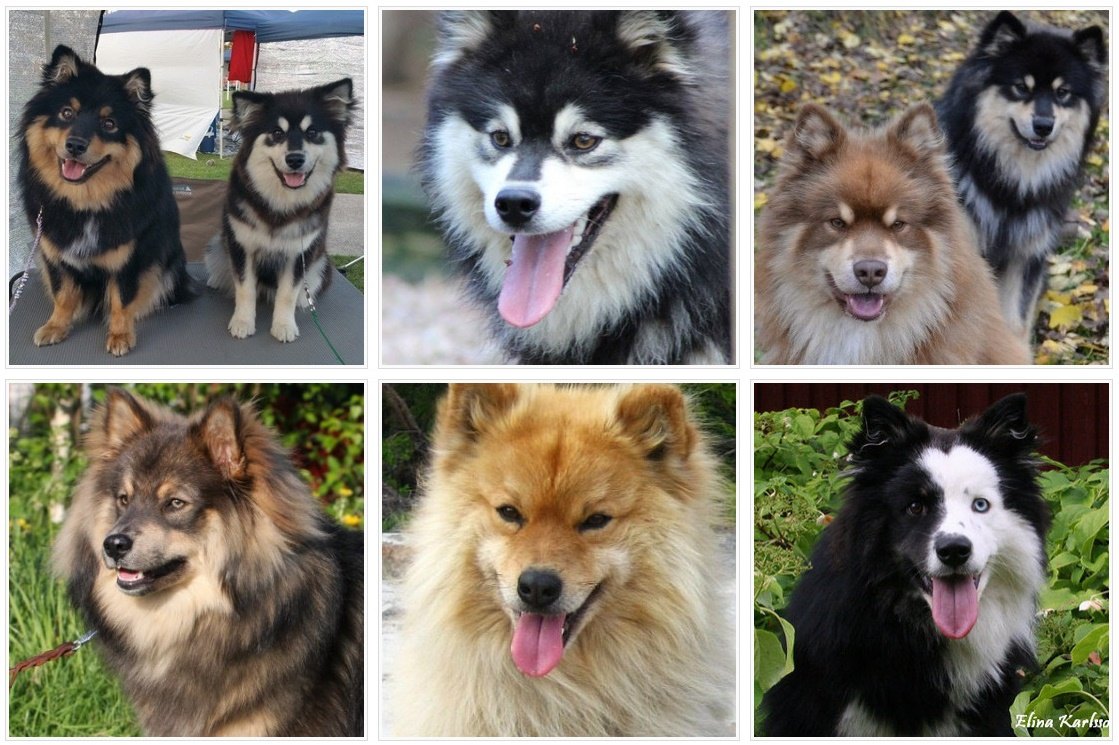 Snow Nose - A paler stripe down the centre of the nose leather with less pigment. The intensity can vary. Most often seen on Domino but can occur on any dog. In some cases only noticeable in Winter (linked to less sun exposure) and is quite common in Spitz breeds. 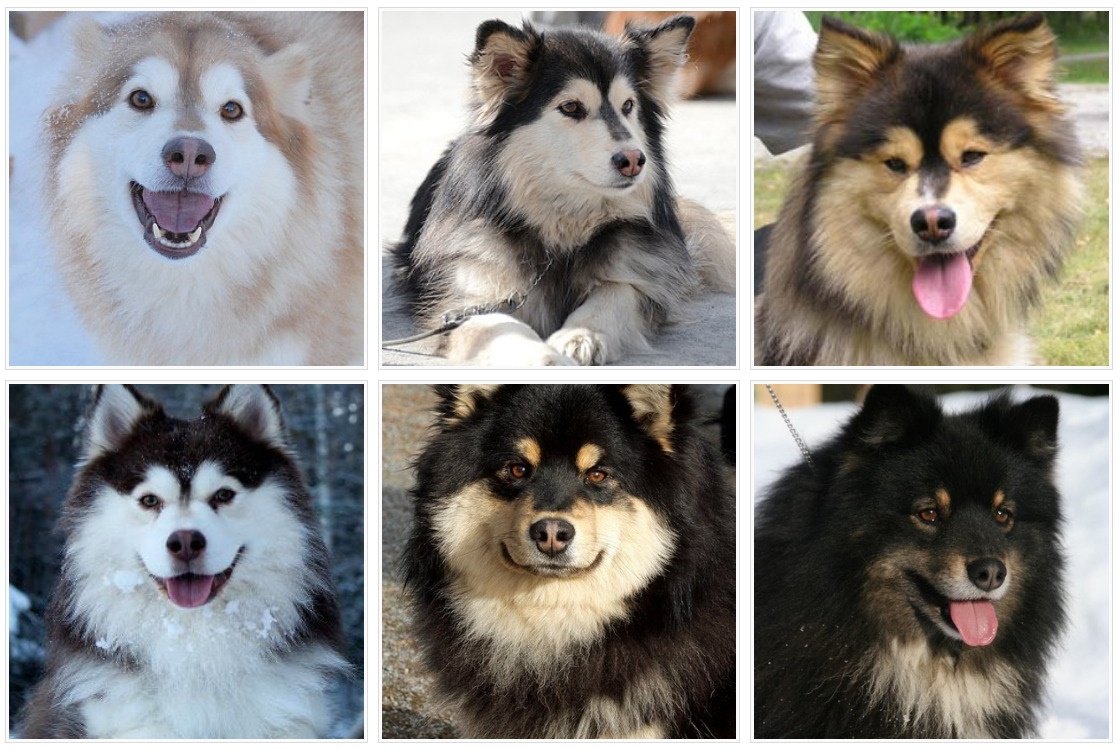 Genes are all tied together into a long strand of DNA. A gene is basically a set of instructions which tells the cell how to produce certain proteins (pigment, in this case). The genetic make-up of a dog is its genotype. The physical appearance of the dog is its phenotype. Genes are made up of two Allele's: one from each parent. Each point on the strand of DNA is called a locus. A 'locus' (plural 'loci') refers to the specific location on the DNA where the gene is found.

The combined effect of the 4 major loci (A, B, E and K) is the colour of the dog. Due to the complex interactions of these genes, it is possible for dogs to carry hidden colors which may appear in their offspring.

The E Locus hosts 8 variants with 4 known to exist in Finnish Lapphunds. 'E', 'eg' (domino), 'ed' (domino) and 'e'. If a dog is 'ee' the dog will be cream (can be shades of yellow and red) and everything on the other loci is hidden until the next generation. If the dog carries one copy of 'E' it will not be cream and you look at the next loci to determine colour.

The K Locus has 3 known variants. 'K' also called 'KB' is dominant solid colour. If the dog has even one copy of 'KB' the dog is solid and everything on the A locus is hidden until the next generation. 'Kbr' is brindle which exists in our breed but is uncommon and 'ky' means there's no influence from the K loci and we proceed to the next loci to determine colour. All 3 variants are present in Finnish Lapphunds, though they're mostly 'ky'.

The A locus has 4 variants, all present in Finnish Lapphunds. 'Ay' is Sable the most dominant, 'aw' is wolf sable. 'at' is tanpoint and 'a' is recessive solid.  Any dog which has at least one copy of 'Ay' will be sable and any dog that is 'aa' will be black. If not 'Ay' and at least one copy of 'aw' they will be wolf sable. If the dog is 'at/at' or 'at/a' they will have tan points. Consider the A locus to determine how much black will be allowed to express; the higher up the dominance, the less black allowed to appear. The lower the dominance, the more black will be visible.

The B locus has 2 variants. 'B' Black and 'b' brown. A dog which is "bb" will have brown fur in those areas that would otherwise be black. Brown is caused by at least 4 different mutations. Finnish Lapphunds have at least 3 of them.

The D locus is also relevant to Finnish Lapphunds and is the Dilution Loci. There are 2 variants. Non-Dilute' D' and dilute 'd'. Dogs which are "dd" have "Blue" fur in place of black, and "Lilac" in place of brown.

Another way of putting it:

E Locus
2 of the following Allele's will be passed on to a puppy:
E - Normal (K and/or A locus will be expressed)
Eg - Domino (Sighthound type) Eg has been found in several Lapphunds, but negative in other Dominos so we have at least 2 types of Domino in our breed.
Ed - Domino (Spitz type) A test was recently developed to find 'Ed' domino in Lappies. There is also another type of Domino called 'Husky type' which has yet to be found. This may also be in our breed.
(Eg/Ed are recessive to E and dominant to e but their dominance towards each other is unknown at this time.)
e - Cream (when a dog inherits 'ee' this gene suppresses all other colours)

K Locus
2 of the following Allele's will be passed on to a puppy:
KB - Dominant solid (B locus determines whether solid Black or Brown) Proven in Finnish Lapphunds by DNA but not believed to be common.
Kbr - Brindle -currently can't be DNA tested for but is known to exist on the K Locus.
ky - recessive non-solid (A locus will be expressed)

B Locus (base colour)
2 of the following Allele's will be passed on to a puppy:
B - Black. If the puppy inherits one B means the puppy can not be Brown.
b - Brown (comes in 3 known variations and at least 1 more unknown - Finnish Lapphunds have been proven to carry all 3 known variants).

D Locus (Dilute)
2 of the following Allele's will be passed on to a puppy:
D - Normal If the puppy inherits one D the puppy cannot be Dilute
d- Dilute

Rules
There are a couple of rules. The rest are so dependent on the combination that it's too complicated to try to list them all here.

Other Colours/Markings
The S gene deals with Spotting including piebald and possibly Irish Spotting. The newly uncovered I for Intensity gene is now available through some labs (late 2019) and is proven in several breeds, though often there'll be variables and breeds who have different mutations.

Limitations
Of course, a parent can only pass on what they themselves have to give, so for example, you won't get a Wolf Sable (Aw) dog from two Black and Tan (At) parents

Further Reading
Clear as mud? Don't worry, it can take a while to wrap your head around it. In the meantime the Dog Coat Colour Genetics page is a great resource for plain speaking explanations of colours and inheritance.
Vetgen also have a page on genetic colour testing with a simple breakdown

I can't recall who put this together or where i found it and i can't remark on the absolute accuracy of the following list, but it does help with some of the word choices i've seen for colours over the years and provides equivalents across several languages