We gathered at Harden for an impromptu reunion and a couple of shows.

Knowing Winter was only 6 points away from her Australian Champion title, I had entered with the sole purpose of catching up with friends.
It'd been a while since we'd seen each other, and Winter was the second youngest girl in the field.

So I was completely surprised to have Winter awarded one of the two Bitch Challenges over the weekend and earn those final points for her title..
It seems to happen when i least expect it.
I'm so thrilled with Winter. She is my first home bred and handled Champion. The puppy who wouldn't leave.
I think i'll keep her around a while longer yet. She's a keeper :) 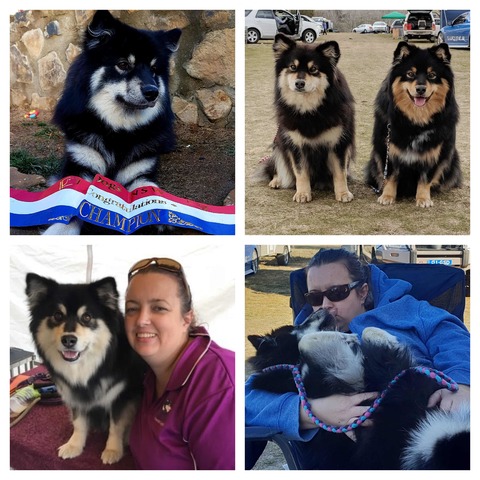 Late in September we entered another weekend of shows. The ACT Spring Carnival and Working Dog Specialty shows with 4 shows held over 3 days.
We were surprised to discover 16 Finnish Lapphund entries on the first day. The largest entry we've seen here in a while and it made for a bit of a spectacle for the locals and a great opportunity for people wanting to meet the breed and learn more about them.

Summer is finally finished with her phantom pregnancy. She's really affected by these quite strongly. But she's my bouncy, happy girl again and i knew she'd be 'on' on the weekend. Finally.
However, to my complete surprise and delight, Summer was awarded Best of Breed for the first 3 shows. Even more surprising was to have Winter take Reserve Bitch behind her mum at all 3 shows and convert 2 of them to Runner up Best of Breed.

Then Winter did one better on the last day. She took Best of Breed, and her mum, Summer took the Reserve Bitch and Runner up Best of Breed.

To add to my amazing weekend, Summer pulled off not 1 but 2 Best Exhibit in Show. One was under Mrs Ros Barden (NSW) who is studying Group 5. She was lovely and so excited to have such beautiful Lapphunds to judge. She thanked us several times over and had a lot to say about the quality of her entry

The second was under Dr. William Crozier. It wasn't until we saw him that i suddenly recalled he'd judged the very first Finnish Lapphund Specialty show in NSW in 2014. The last time he'd seen Summer she was post whelp naked.
I was delighted to show under him again and he was so impressed with Summer that he awarded her Best in Show. He also awarded Winter Reserve Bitch Challenge behind her mum.

It didn't stop there though. We had a few of our Caleebra girls at the show and they all did quite well.
Jaina, Aura and Vader all won their class in the Open Show under Mrs Ros Barden (NSW).
The lineup for best bitch headed by Summer, was all Caleebra bred girls. As the judge deliberated she thanked us for a line up of Beautiful Lapphunds and i took my eyes off Summer to look down the line and thats when it struck me.
Those 'Beautiful Lapphunds' were all mine. Summer - Vader - Winter - Aura and Jaina. It was a wonderful and surreal moment and a real rainbow of colours.

In the sports Arena, Eva (Caleebra Burberrys Brit (AI)) has been quietly powering through trials.

She entered her first Rally Trial in May and by the end of September had earned her Rally Novice, Advance and Excellent titles.
She's also competing in the Obedience arena with passes towards her first level Obedience Title (CCD) and has also earned her first passes in Agility Jumping.

Wendy and Eva have always had a strong bond, so it's no surprise at all to see them competing so well together. I wish them all the best of luck.