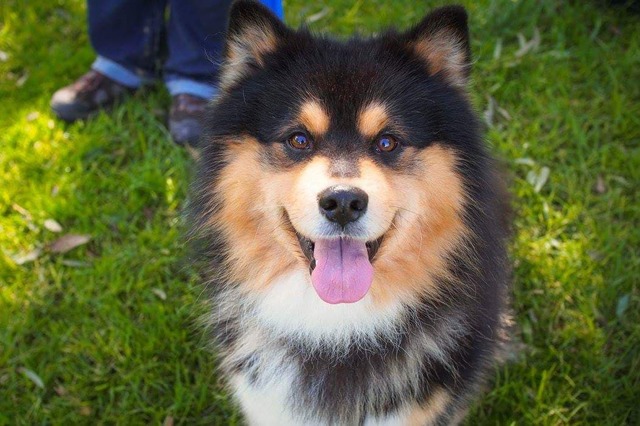 Aslak comes to us from Vintervidda kennels in Norway. We are already in love with this gorgeous boy and are so very thankful to Christian for allowing this handsome lapphund to come to Australia. Importation changes were announced late in 2013 and we had to beat the clock to get him here.
In fact, the original plan was to bring in a girl, but Christian convinced me not to look past this boy and as I've seen already, there is a lot to like.
He has a lovely, handsome head, lovely bone and substance and the easy, natural movement inherited through his pedigree. He also has rich tan markings, a rather adorable white foot and a divine temperament, friendly and submissive to people, whilst calm, playful and happy.
I never expected to be afforded this opportunity but events seemed to fall into place, with the unplanned mating and arrival of this litter, and that stand out boy that Christian was watching from day one. Perhaps it was meant to be. Whilst there was and still is a lot of emotion and sentiment behind our early decisions, we know that this little character will shine his own light and make his own mark here with us and we're looking forward to sharing our future together.
Behind Aslak are some lovely new and familiar dogs. Those who know of Titan will note that he and Aslak share the same dam. We've been a fan of her for a few years already and seen her produce some lovely dogs. We are incredibly humbled by the opportunity to welcome a second son of hers here with us. Surprisingly, I recall when Aslak's sire, Lapinlumon Addja was born, and we admired him from afar. Later, when his breeder posted adult Addja photos online, i was again struck by this boy and his pedigree. I never dreamed I'd actually one day have a son from Addja, and all the lovely dogs behind him, including the beautiful Lapinlumon Kiiski, whom i think i can credit with my first 'wolf sable' crush. Having initially been attracted by his obvious connection to Titan, and his extended pedigree, we were falling in love with Aslak through all the reports, photos and video of him we'd been receiving for the few weeks leading up to his departure. We were so glad to finally meet him and he more than met our expectations.
Christian had happily (or perhaps wistfully) suggested that if i changed my mind, that would be ok. That Aslak could stay in Norway as long as I like. I tend to agree that he'd make a lovely addition to Christians show team alongside his handsome half brothers Ukkonen av Vintervidda and Unelias av Vintervidda, But just the same, we think we'd rather have him be an ambassador for Vintervidda Kennels right here in Australia.
Aslak is co-owned with Megan of Aetherglow Kennels, which is where he'll also be living most of the time. But we'll be sure to steal him home for visits when we can. He has already made his show debut and is creating a bit of a sensation everywhere he goes. He was a super cute little puppy and has matured into a gorgeous dog and we feel blessed to have him.
Aslak is largely only shown at the bigger Finnish Lapphund meets, going up against the toughest competition in the country.