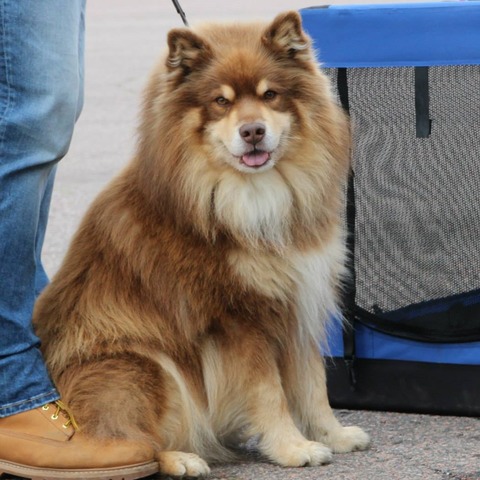 A few years ago I saw a photo on a Facebook page and followed it to Kontioharjun Kennels. There I saw more photos of Hillasuon Pellavanuttu's daughter 'Hippu' (Kontioharjun Uniharha) and thought she was just the prettiest bitch I had seen in a long time. A few years have passed and now embarking on my own breeding and looking for some lovely bloodlines to contribute to the development of Lappies in Australia I remembered these girls. Then i stumbled across the very handsome Hillasuon Leojokela (after a Finnish actor and nicknamed Leo the Lion) out of Hillasuon Pellavanuttu's sister. How very exciting to see he is also from Pompparinniityn Donttu.
Although Summer is a Donttu granddaughter, I have actively been looking for another connection to Donttu because I love what he produces. To have the lovely Hillasuon Pirtanauha make up the other half of this boys pedigree just makes finding him all the more exciting. Leo lives at home with 3 young boys whom he adores and his own son Hillasuon Finnur, 'Manu'. His family say that Leo is very smart and easy to live with. He loves to train and enjoys Obedience and learning new tricks. One of his favourite places is the forest. There he runs around finding sticks to chew on, and chasing squirrels. Leo tends to prefer the company of people to other dogs, but he is calm natured and good around all other dogs. His favourite toy is a ball which he likes to carry around and have his family, and his son, chase him for. His son 'Manu' is a lovely young dog with a very promising future, already a Finnish Champion at a month over 2 years of age (the minimum age requirement to become a Champion in Finland/Nordic countries is 2), he titled winning Best of Breed (of 51 dogs), Best in Group and then awarded 3rd Best in Show. Leo also had a litter at Vanilla's Honey Kennel and has another Finnish Champion son in Vanilla's Honey Hope you Like, 'Tosca', also gained just after 2 years old. Tosca was also 3rd place in the Champion Class at the 2014 World Dog Show in Helsinki, no small achievement. We truly hope Leo can produce some just as lovely Lapphunds for us in Australia.
After enquiring with his owner, and finding out about Leo's fantastic temperament with kids and dogs alike, i am very happy to have a small part of this boy whose offspring will be calling Australia home.

Leo is the sire of our Burberrys Litter