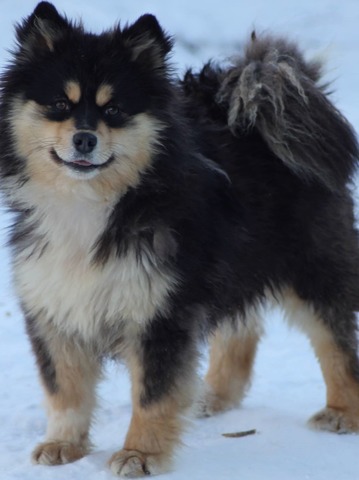 When this litter was announced I just about fell all over myself, gushing to Sarah and admittedly being completely over the top about how much i'd love a puppy from the wonderful combination of Ukko and Xaana. She had a lot of interest in this litter and i didn't like my chances, however, Sarah contacted us a few weeks later and asked if we'd be interested in co-owning this sweet little girl with her.
Of all her many qualities, one thing that tugs at the heartstrings most is her signature white foot (front right). It's reminiscent of her uncle, Ukko's full brother, our darling ï»¿Titanï»¿, and of course, also, the handsome Aslak, a half brother of Ukko and so another uncle to little Elsa.
And so we've made plans for this little munchkin to join our growing Lappie family in a few years time when she's done growing up in Sweden.
I really can't say enough about the pedigree so i'll let it speak for itself.

We are so thankful to Sarah for sharing this little darling with us and we look forward to following Elsa's future with great interest.

Update: I'm not even sure how to summarise the incredulous circumstances of what happened to little Elsa. But i shall try. Early in 2018, Elsa was seized by Swedish authorities in an animal welfare case and placed into government care.
My claim of ownership (which would have separated her from the case) was ignored and Elsa was onsold by the government before the welfare case had even been settled in court.
We followed as best we could and whilst we couldn't confirm which facility she was being held at, we did manage to find her new owner within hours of her being sold. We are now friends on Facebook and follow Elsa's life from afar.
It didn't seem fair after the months she'd spent locked up to put her through anything further. She has a lovely new life with a cream Lappie friend and whilst we're so sad she never made it here, we're glad that the outcome for her was a good one.
Some of the dogs seized never made it out again.