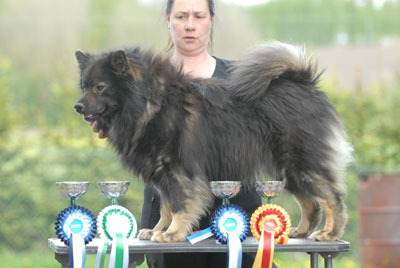 Putte is a boy I found in a roundabout way but right at the perfect time. Quite often my research will see me working in reverse through a pedigree and it happened in this instance that I fell upon Putte late in 2014. There weren't too many photos of him about and so I kept researching. Then, in the middle of 2015, he had a great weekend at some shows. I hoped and was rewarded. There were photos. He was exactly what I was hoping for. I think I made contact with Saara Sampakoski then and there about him but it was another year before I was actually organised enough to collect semen from him to bring to Australia. Our sincerest thanks to Saara Sampakoski for her invaluable assistance in arranging all the details of his collection.