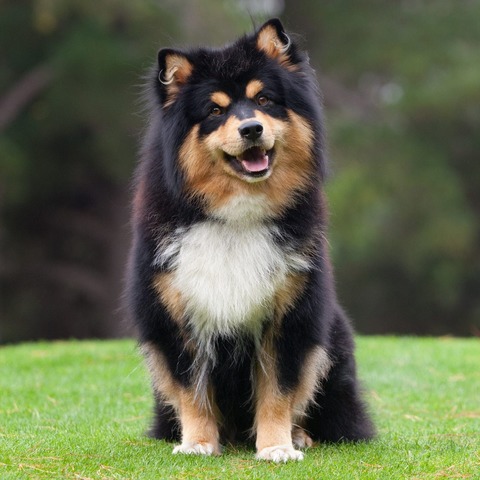 Everyday with Dolce is a fun-filled rollercoaster of laughter, love and excitement. He is my constant shadow, my companion and my little cuddle monster. When i stumbled across the Finnish Lapphund a few years back, I was smitten with Emmi, Au Grand Ch. Lumiturpa Emmi CCD RE JD HT (Imp FIN) from Armahani. I waited two years for Emmi to have her next litter and heaved a huge sigh of relief when Dolce was born (among 6 sisters) and again when Jacq confirmed he was to be mine. He loves to play and act the clown and rushes into everything without regard. He shows a real knack for trick-training and is making a fine obedience pupil, attaining his Rally Novice title in 2013, his Rally Advance title in 2014 and was on his way to his Rally Excellent title in 2015 before i took ill, with only one pass needed. He likes food, but loves to celebrate which means we're always having a dance together for every little achievement and we're both exhausted by the end of training.

His sire is Louis, Aus Supreme Ch. C'est Louis Armstrong des Chevaloupsgreg CD RM HSAs (Imp USA) who is an all-rounder with fantastic wins in the show ring as well as titling in several performance disciplines, Louis is now largely retired from the show ring, but has quite a few offspring around the country also doing well.

His dam Emmi, is the most stunning representative of the breed and the reason we got started in Finnish Lapphunds. Largely retired, she still took out RUBISS at the FLCV Specialty in 2013 and Best in Specialty Show at the FLCNSW Specialty in 2014. Emmi has a couple of offspring in the country competing at shows and performance sports, and many more relatives have since been imported by other breeders. Dolce takes after his dam thus far in looks and build, and all who meet him comment on how gorgeous this boy is.

Dolce is co-owned with Armahani. Our daily thanks to Jacq Lincoln for allowing this boy to come into our home. We can only hope Dolce is up to the task of maintaining the family honour, and we endeavour to help him achieve all he can. His parents have set the bar high, and we do our best.

After being attacked by a Finnish Lapphund and again by a fluffy, light coloured dog at our Obedience club, Dolce became rather fear aggressive, (unsurprisingly) towards some male Finnish Lapphunds and fluffy white dogs, and whilst we could largely manage this, we couldn't manage everyone else, and found Dolce would become stressed being at shows and so he was retired from the ring. He was able to compete in Rally (including offlead) for several years after this and is still great with most other breeds and dogs but we decided never to put him back in the show ring. Which is a real shame, because there are more like him in the ring now, and he'd probably do better than he did as a youngster when the general look of Lappies was vastly different to him.