CALEEBRA DIAMOND IN THE RUFF (Vegas)

CALEEBRA DIAMOND IN THE RUFF (Vegas) 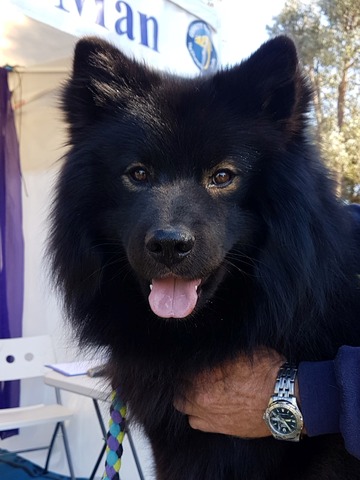 It had never been my intention to keep a puppy from the Diamonds litter, but boy did they make it hard.
Vegas was the dark horse from the beginning, literally. Born solid black with a stray 5 white hairs on his chest, he was a very non-fuss puppy and was very easy-going.
Fi Boal visited the puppies when they were only a few weeks old and she was instantly drawn to this little black ball of cute, visiting him every week and even bringing a few of the kids and her husband along on several visits. It was all great socialisation for the puppies but I never dreamed she'd actually ask me for him.
She was expecting her own puppy only a few months later, and she'd agonised over the decision for weeks. But she was in love and nothing could keep them apart. Fortunately Vegas absolutely adores Fi and her family so it made it a very easy 'Yes' from me. He is a clown about the house and enjoyed his daily walks and off-lead beach time. They've since made the tree change and he has a large hobby farm complete with horse agistment, multiple paddocks and orchards to explore. When the family is relaxing he's usually in the thick of it, either perched on Fi's shoulder, or chilling on the kid's beds or on the couch with his at-home Lappie family.

We get to take this little guy to shows and he's such an easy mover. It's the standing still part that he finds a bit boring.
Still he's doing really well and is educating judges and the public on his solid black colouring which is fairly unusual in Australia and not commonly seen in the show ring.