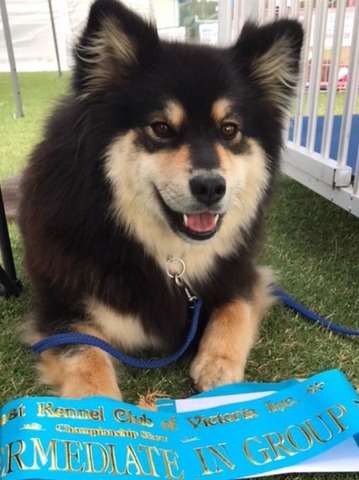 This little Princess is almost the image of her father. Except she's definitely a girl. Quite feminine, she was eye-catching as a puppy and when we stacked her up on the table on assessment day it was unanimous agreement that she was gorgeous and destined for a show home. She now lives with her dad and shares her life with a couple of other dogs as well.

She's already had quite a successful start to her early show career, accumulating quite a few awards as a youngster and achieving her Australian Champion title by 9 months old.

Tawnee lives in country Victoria, and doesn't often travel to the central metro areas for shows, so we're delighted that when she has had the opportunity to compete against other Lappies in larger numbers she's done remarkably well.
The Border Challenge is a friendly 3-day competition between Lappies from the states of Victoria and New South Wales held each year near Albury. It is arguably the biggest show weekend on the Finnish Lapphund calendar each year. This is almost the only time Tawnee actually shows against other Finnish Lapphund competition as she lives local to Albury showgrounds so its pretty wonderful to see her do so well. Her first year in 2016 she was awarded all 3 Baby Puppy in Groups on offer and a 2nd in Baby Sweepstakes from 28 entries. In 2017 she managed 1 Best of Breed and in 2018 was awarded the Bitch Challenge on Saturday and Sunday (she didn't attend Friday). She makes Bianca work hard for it, as running around in circles on lead seems rather boring to Tawnee compared to Agility. Typical Lappie really.

After earning her Australian Championship in the show ring, Bianca and Tawnee then hit the Agility trialling ring and earnt the final quallies for her first 3 titles in one weekend.
She earnt her Jumping Dog, Agility Dog and Strategic Pairs Dog Agility Titles early in 2018.
She loves Bianca and the bond they share is wonderful to see.

We're certainly very happy with her and hope she has a very exciting future ahead.