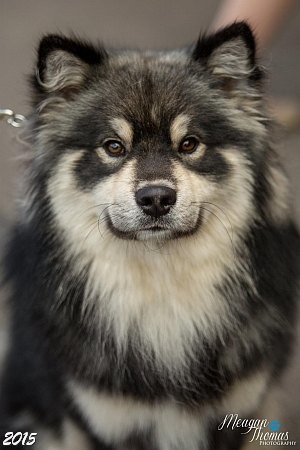 ​If there was one puppy who really burrowed into my heart it was Koda. We called him Gater Boy while he was here due to some markings on his feet which have disappeared now, but he was such a smoochy puppy from the outset, and always the softest and sweetest of puppies.
On assessment day I had absolutely no idea which way the cards would fall, and so it was just amazing to have the handsome Koda come out on top and I was so happy to be able to offer him to his owner, Kelly-Lee, who'd expressed an interest in showing. They match perfectly and its such a joy to see them in the ring together and to hear stories about him playing in mud and puddles at home and out and about in the countryside where they live.

Koda is out of my beautiful Finnish import, Summer and frozen semen imported from Finland from the very handsome Leo. Koda took a fright at a show at a critical age and started to really dislike showing after that. We decided to let him mature away from the ring, and he's a delightfully happy boy with a wonderful life.